*Jennifer Mnookin, Dean of UCLA’s School of Law recently released a research paper on “The Uncertain Future of Forensic Science.” To begin with, the “science” of forensics always had a goal, and that was to “scientifically” prove that discovered evidence supported the conclusion that a person was guilty of a crime. The intention was to convict citizens who had committed crimes, an altogether honorable mission.

As Dean Mnookin describes early forensics: “It’s not that anybody was trying to commit fraud or do something wrong, but these techniques did develop in ways that didn’t lead to them being tested carefully because the judges in these early cases didn’t require it. They just say, ‘you claim to be an expert? Sure.’” In the beginning, and even today, “experts” are trained by the agencies they will serve; that’s somewhat like saying “hello this is Jason, my finance director. I taught him everything he needs to know about finance.” I would want the person collecting evidence to be objective, because lack of objectivity, as we will see, creates problems in justice.

Dean Mnookin: “On the forensic science side, many don’t have any science background. They come to law enforcement and don’t necessarily have a college degree, either. Now many forensic departments do require an undergrad science degree, but it’s very rare to have PhD-level science training, and many forensic scientists are not themselves scientific researchers, so they’re not well-positioned to research their own discipline or think about it from a research perspective. That doesn’t mean they’re not professionals trying to do a good job, but they’re not well-situated to be engaged in the exercise of establishing validity or to deeply understand what that requires.”

An agency which shall remain nameless, in a case that barely resonated beyond the county where the trial was held, used a “hypnotist” in order to obtain information. The hypnotist was “certified,” whatever that means. Look on the internet and you can become a certified hypnotist quite easily. I would have loved to have cross-examined the hypnotist, who (and I cannot confirm this) had better have known quite a few things about memory and hypnotism, as well as understanding hypnotic age regression. Perhaps this person did know a lot about human memory, or, perhaps a certified hypnotist does understand the psychology of hypnotism. My point is that resorting to hypnosis for testimony is fraught with holes any competent lawyer (with an understanding of psychology or employing the skills of a psychologist) could drive a truck through.

On the forensic science side, many don’t have any science background. They come to law enforcement and don’t necessarily have a college degree, either.” ~Dean Mnookin, Dean of UCLA School of Law

In 1978, Ted Bundy was convicted (in part) by the testimony of one Dr. Souviron (a dentist) and forensic dentistry consultant Dr. Lowell Levine, who testified that the bite mark on Lisa Levy perfectly matched Ted Bundy’s teeth. The year 1978 was the first time in Florida’s legal history that a conviction was supported by bite mark testimony. The bite mark was the centerpiece of the Bundy trial.  Please understand that I do not for one second believe that Ted Bundy was innocent. Those that testified at the Bundy trial went to great lengths to prove their point. Two issues: One, teeth are not like fingerprints, and two, it is common knowledge that teeth, unlike fingerprints, can certainly be altered.

So Much for Objectivity or Justice

One of the top FBI forensic scientists, Dr. Frederic Whitehurst, a Ph.D, an official whose testimony would have been critical in many cases, was found to be rather biased by an investigation by the Inspector General’s office. To quote information from the book “Tainting Evidence” by John F. Kelly and Phillip K. Wearne: “For nearly ten years, until he was suspended and put on ‘administrative leave’ just weeks before the IG’s report was published in April 1997, Whitehurst had reported his own observations and what others had told him. Underpinning his complaints and their persistence were three things: the unscientific nature of so much of what was being passed off as science in the FBI lab; the culture of pro-prosecution bias rather than scientific truth that pervaded the lab, including the possibly illegal withholding of exculpatory information; and the complete inability of the FBI lab or its management to investigate itself and correct these problems.” 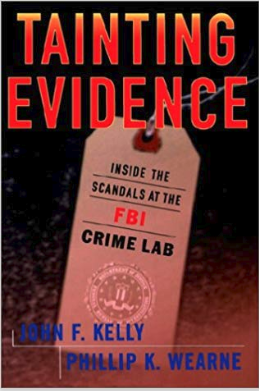 The FBI is the law enforcement agency in the U.S. I can’t say that with a straight face anymore. The corruption, i.e., political influence tainting its operations, and general mismanagement have eroded the credibility of the FBI. While I am reading about the problems and mismanagement of our top law-enforcement agency, what I have not read or found is any documentation on how they have addressed those issues, or what measures they have taken to exonerate those convicted on false evidence or testimony. The lack of transparency should be truly frightening. That’s the great thing (if you’re a government official) about imprisoning people unfairly; the incarcerated  have a miniscule ability to fight back, and I find the punishment for those who violate the rights of the unfairly incarcerated innocent citizens to be far, far too lax.

Let’s face it, their self-righteousness and egotism is a reflection of the Deep State’s interest in the U.S. citizenry, that is to say, it is their privilege to walk all over citizens without any significant consequences. Ask Martha Stewart, and she will tell you never talk to the FBI without your attorney sitting right beside you. The threats to “amp up” if you bring in your lawyer are only a ruse to turn an interview into a case of lying to them, and then, you’re on the hook. As in all cases, never talk to a law enforcement official without your legal representation hearing and framing every word.

Dean Mnookin: “At the same time, a lot of the changes seem pretty modest and there’s ways in which many judges are still exhibiting somewhat ostrich-like behaviors about forensic science and don’t seem interested in or willing to confront the hard questions that insufficiently validated forms of evidence raise.”

To conclude, to quote Blackstone: “For the law holds, that it is better that ten guilty persons escape, than that one innocent suffer.” My position is justice should be fair. It turns out forensics are fraught with fraud, claiming science when, in fact, scientific principles are disregarded in the interest of wining at all costs. We complain that our correctional institutions are packed to the walls, while more and more convicts are being exonerated by DNA. Does anyone see a problem with any of this? I’m quite happy a respected member of the legal community is finally recognizing a severe, if not critical problem with our justice system.

Perhaps forensics should be the first measure of reform of our justice system. The second would be to see that those who put their personal goals and agendas before justice be removed and ideally, incarcerated for an extended period of time. And, of course, while they are incarcerated, make sure their fellow inmates know their previous occupations before they were incarcerated.

For those who wish to challenge facts, the sources: