*250,000 Californians from the north and the south are currently evacuated from their communities. At least 48 people are dead with more than 7,000 structures in ruins. It’s five weeks before Christmas and once again firestorms are raging across the Golden State.

Six years of unrelenting drought in tandem with elevated (ocean and air) temperatures are most certainly a deadly combination.

Since 2010, more than 130 million mature trees have perished across the state. Water-starved coniferous trees communicate their plight to bark beetles. The insects deliver the coup de grâce.

In fact, across western North America this is a pattern that’s all too familiar: 30 billion mature dead trees. Instead of removing CO2 and giving off oxygen, gigantic tree graveyards are decomposing and contributing to the overburdened and overheated atmosphere.

No trees. No life.

Those dead trees are also kindling for firestorms like the plume-driven Carr Fire in northern California earlier this summer. These are a new terrifying breed of climate-driven firestorms. 2,700 degrees Fahrenheit with 165 mile per hour winds spawning firenados and plumes evident 7.5 miles into the troposphere.

It’s axiomatic: the warmer it becomes the larger and more intense the California (and elsewhere) firestorms. Both wind and plume-driven conflagrations are increasing.

The irrefutable driving force is fossil fuel heat. Recently, my Princeton University colleagues and others revealed that since 1991 an additional 325 zettajoules have been added to the oceans. Since the Industrial Revolution, Man has infused 397 zettajoules of fossil fuel heat into the oceans. That’s the equivalent of detonating five Hiroshima-style bombs a minute for 75 consecutive years.

Since the oceans drive the climate, Earth has entered into climate instability. That is, higher highs and lower lows with much extreme weather piling up in between. In September, for example, Hurricane Walaka submerged Hawaii’s East Island, wiping out vital habitat for the endangered green turtles and critically endangered monk seals. The Antarctic glaciers are even groaning as they, too, rapidly disappear.

The Antarctic glaciers are even groaning as they, too, rapidly disappear.”

Meanwhile, vast areas under the sea (corals and kelp forests) and on land (ancient forests) are dead. Cooked to death.

Ladies and gentlemen, we only have one home where we all must breathe air, drink water and eat food. How much more death and destruction must we endure before the world leaders enact a zero-combustion global economy?

It’s a no-brainer to tackle this planetary catastrophe head-on:

Failing to plan is planning to fail. 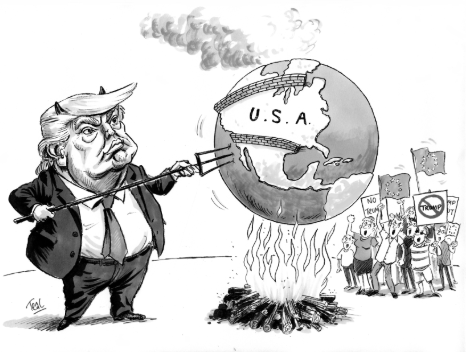