The warmth we need to grow, the illumination we need to see new things and the undying pull to keep us on the right trajectory are things we expect both the sun and our teachers to provide for us.  The sun doesn’t have much choice, and at least theoretically we can count on it to continue to deliver until it inevitably burns itself out.

Teachers do have a choice, and when they burn out society loses a little warmth, a ray of light and a steadiness of direction.

People become teachers for reasons varying from following in family footsteps to following a calling.  Teachers are as diverse a group as any professional faction in America, but generally speaking, teachers are lovers, not fighters – they are by nature nurturers, encouragers, promoters, educators.  At a median salary of about sixty thousand dollars per year, they often donate as much time and effort as they are being paid for, giving of themselves, their time and their … teacherness.

The President of the United States of America now proposes adding a couple more line items to their job description, including arming themselves and being trained to counter-attack terrorists and murderers.

Eighty hour weeks AND a chance to kill and be killed – for $60K per year?  Where do I sign up?!  I bet I’ll even get to pay for my own gun and ammo!

The rationale being dispensed is that criminals love ‘no gun zones’, and that may be true.  Another thing that is true is that guns scare kids.  Guns scare many teachers too.  Scared people do not do their best work.

Adults, particularly those for whom shooting a gun is a fairly regular occurrence, may find comfort in the presence of an armed guard in a classroom, believing that good will triumph over evil and that this bad-ass teacher can take out any punk that comes down the hallway, as if we are educating our children in a real-life Batman movie.

On the other hand, to kids – even teenage kids – guns just mean the possibility of shooting, hurting and killing. 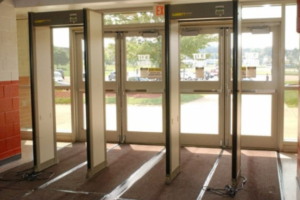 The difference between the approaches is that once students and teachers pass the entry points and the doors are locked, they are 1) safe and 2) not trying to learn or teach while scared for their lives.  As a bonus, young idealistic bright people that are considering a career in teaching will not turn away at the prospect of having to work in an unsafe environment or being pressured into carrying a gun.

Just as we need the sun, we need teachers in order to survive as a society.

We must pay them better, reduce their work load, show our appreciation more often and take action to give them a safe work environment.

The bell rings and twenty-nine angelic faces look to her for guidance. In that moment she

Once upon a time in a land called America, schoolchildren were taught how to cross the

A graduate of Portland State University, Steve Kloser is the author of “Beginning Band - A Guide to Success” and “Let's Make Music - Classroom Recorder Course”. He is also an accomplished teacher, conductor and composer, having penned numerous pieces including: La Vida and Fly With Me. Teacher, web developer, Packers fan and proud American, Reeno's usually slanted outlook often presents an unlikely perspective on issues old and new. Reeno currently lives in Portland, OR. Read more at www.reeno317.me or follow Reeno on Twitter at https://twitter.com/portlandreeno.

The bell rings and twenty-nine angelic faces look to her