It is speculated that politicians in over a dozen states are now growing jealous of the Cannabis boom happening across the legalized areas of America. While those pouty politicians spill their guts to their therapists, let us examine a truly underdog story which has nearly been a century long in the making.

Shortly after American prohibition, Marijuana, like alcohol, was being chastised – especially by newspaper columnists and politicians in our nation’s capital. In turn, Marijuana became a substance associated with the early 20th century’s greatest fear of Mexican immigrants who were turned wild by the drug’s psychoactive properties. This negative connotation remained for decades and if you were too stoned to remember the 1970’s – spoiler alert, many people were, so no need to get paranoid – Marijuana was actually classified as a schedule 1 substance under the DEA or Drug Enforcement Agency’s drug inventory during President Nixon’s War on Drugs.

This classification placed Pot second to hard drugs such as methamphetamines and heroin. Laws even became so strict for Marijuana offenses, that decriminalization was established in some areas of the US during the same decade it actually started being enforced – guess pot does calm people down after all. However, as the years progressed, significant political, yet more importantly, economical motives, had truly begun altering American’s attitude toward the magic herb. In the 1990’s, lobbying and the good people of the US of A pressed Congress and their state legislatures to begin allowing the use of medical marijuana for certain patients who qualified for its use.

As a result, the DEA had softened its grip over their classification of Marijuana as a “hard drug” – bringing it down to a schedule 3 substance, alongside some commonly misused prescription medications and metabolic steroids.

However, it wasn’t until 2012 that the most monumental transformation of Marijuana use had occurred – which would inevitably launch it from rags to riches…

…when Colorado and Washington passed groundbreaking legislation to legalize Marijuana use on the state level.

Since then, multiple states have decriminalized the use of Marijuana or have even gone so far as to fully legalize recreational consumption. One of America’s number one enemies in the war against drugs had finally had its name cleared and for you savvy investors, this news couldn’t get any better for our pockets.

Before we begin dissecting Cannabis-related income potential, it is important to mention that the following information has been separated into sections by risk – as you will soon learn, this industry although growing, can be quite risky given its development continues to remain within a gestational period:

Today, if you were so inclined, you could actually purchase Exchange Traded Funds or (ETFs) belonging to marijuana related businesses. However, the majority of these companies reside in countries outside of the US – namely in Canada and Europe. Examples of some companies who have boomed in the recent years include: Cronos Group Inc., Abcann Global Corporation, Cannabis Wheaton Income Corp., Inmed Pharmaceuticals Inc, Emerald Health Therapeutics Inc., Surna Inc, Growgeneration Corp and Marimed Inc. With the surge of such companies in the business market, stock prices have been shown to be 10x’ed by hungry investors looking for a piece of the action. But what about conservative America with its late to the party legalization? What does it have to show respective of Marijuana financials and business growth? Good question. May I introduce you to the MJX – the New York Stock Exchange’s very first Marijuana index fund. Inside this fund you will find stocks of companies revolving around marijuana pharmaceutical, tobacco and overall cultivation and harvesting industries. 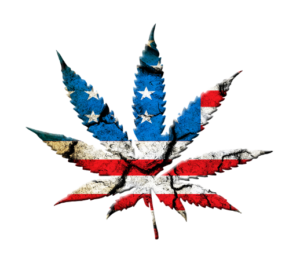 Now, if you are a wise investor, you will read the tea leaves – or dare I say, weed leaves when it comes to investing in American Marijuana. With a limited amount of options available, it is difficult to justify solely purchasing an index like the MJX. Not to mention that Marijuana is still ILLEGAL on the federal level in the United States, which makes the business of Cannabis quite precarious.

Therefore, a wise pot investor would be one who diversifies their portfolio in marijuana related companies between the United States and the rest of the world which currently offers their own ETFs and indexes.

After further digging, please also note that purchasing the MJX index requires a high fee for purchase. However, the potential for growth may very well outweigh cost with a buy and hold strategy.

You may feel the market to be too fickle for your liking and are looking for something more simplistic regarding investing, yet much more daring than purchasing shares of Marijuana companies. If this describes your sentiment, then likely you will want to examine Marijuana crowdfunding sites such as www.fundanna.com.

With platforms such as these, you are essentially contributing money for Marijuana businesses’ by providing startup cost payments. In turn, you may be paid dividends – although, they are rarely paid however – or shares of the company itself. Given this industry’s potential within the United States business market, one could nearly compare this upturn to the California goldrush in the mid 1800’s. Some may put everything they have on the line for a better life and strike it rich, while others may lose it all. Thus, as with all investing, this can be an extremely risky endeavor, but certainly an intriguing option for investors who are thrill-seekers looking to diversify their assets – as it offers high risk-high reward potential. One added bonus of Fundanna, is that if you are having cold

feet regarding the bud business you’ve invested your funds into, you actually have the power to pull your money out within 48 hours of closing. So, if you absolutely need to, you can puff puff pass on poor opportunities. I know, I know, my marijuana innuendos are getting stale!

For instance, did you know that most accredited medical Marijuana dispensaries in legalized states do not allow customers to purchase products with credit cards? Now you may say to yourself, interesting fun fact, but what does this have to do with making money from Cannabis? If you are a passive income junkie like myself, it probably isn’t hard to take one glimpse at dispensaries as if you are the Big Bad Wolf from Red Hot Riding Hood with eyes protruding and tongue watering.

What I’m getting at are ATMs. New or used ATMs will run you about $1,000-$3,000 depending on its condition. Upon purchasing an ATM, you can then program a fee for use of your machine and ask dispensary owners to place your machine inside of their business. When considering a recent U.S. Consumer Payment Study, researchers have found that credit and debit cards were the primary choice of payment when it comes to purchases of just about any common product ranging from retail items to gasoline. And let us not forget that customers sole purpose when visiting dispensaries is to buy Marijuana and related-consumable products. They will likely need cash and you are the closet bank to those lazy stoners. Therefore, your chances of high return on investment for buying and placing an ATM in a Cannabis dispensary would likely be advantageous.

If you guys have questions or want to comment on the material published in the post, feel free to leave comments below – if you haven’t already be sure to like Slanted Online on Facebook.

And of course, if you would like to learn more information about Cannabis investments or how I earn income with Marijuana ETFs and indexes, feel free to contact me at www.proactivetrainer.com or schedule a 1-on-1 coaching session with me NOW. Until next time my friends!

Warning: Financial information and suggestions found in this article, although based in research, are the analysis and opinion of the author. The author does not claim to be a financial analyst and suggests that you discuss future financial decisions and investments with a financial advisor.

*Who would think that Members of Congress have one unique skill: picking
*It has come to pass, that AI (Artificial Intelligence) and robotics (the
*We all know that internet is teeming with liars. Conspiracy theorists and
*How to succeed in business in the twenty-first century: Outsource as much
*“Describe the culture here” is a question I like to ask in
Go to Top

A concept that is likely as old as civilization itself