*As a nation watched, the recent Senate Confirmation process for a United States Supreme Court nominee was reduced from “he’ll sail right through”, to a cruel and calculated political hit against one of the finest jurists this country has ever produced.  It is important to understand, here, that the drama on display was not ever about Judge Brett Kavanaugh in the first place, at all, but about just how far off the rails the Senate Democrats have gone, and on top of that, about the #metoo movement being weaponized against a conservative man in his quest to faithfully serve.

That movement, so important in its cause, is now reduced to a shadow of its former self.  These people can no longer be taken seriously given that they’d automatically dismiss due process, and fairness, in favor of a clear cut example of a mentally and emotionally unbalanced woman with nothing but a decades old empty assertion that went no where fast.

The #metoo movement, having held the likes of Ford up as some kind of heroine, is now the #seethru movement, they are as transparent as a brand new pane of glass, as transparent as Senator Diane Feinstein was in holding onto that letter for weeks in her attempt at sabotage (findings of the investigation now underway will be most interesting).

If Brett Kavanaugh was not a judge, and was instead, say, an engineer seeking a contract with a major client, and Christine Blasey Ford were to have come at him to usurp him in that scenario, she’d have been dismissed instantly, not because that client wouldn’t have cared a whit about women’s rights, or about sexual misconduct, but because she was so transparent that she’d have gone automatically ignored in the interest of justice (pun).  No, a woman cannot level accusations at a man for sexually abusing her without a shred of evidence or corroboration, of course not, and Kavanaugh would’ve gotten the contract without a moment’s consideration about someone coming out of nowhere with an ancient, empty accusation.

Likewise, if this were an attempt at criminal prosecution, a ham sandwich would’ve been more likely to draw an indictment than one Brett Kavanaugh.  This horrid attempt at character assassination tells all Americans all we need to  know about what has become of the Democratic Party of this age, time and era, and every day American citizens who are of that political party would do us all a favor to demand much, much better from their leaders.

A man who has devoted his life to public service, and whose credentials are as impeccable as can be found (thus the ‘sail through’ sentiment from most  quarters), Brett Kavanaugh, was beset upon by the same people who’ve venomously attacked many a fine human being through the years, and it’s time that they be held fully accountable.  They, as in liberals with power, ripped Governor Sarah Palin to shreds in the 2008 presidential election cycle, for example.  For crying out loud, the same people who tried to destroy Brett Kavanaugh attacked that popular governor, and mother of five, as savagely as saltwater crocodiles would attack an emu, this, as they steadfastly ignored and ignore countless women’s credible accusations that Bill Clinton accosted them, and worse.

Who the hell are these people?  President George Walker Bush was attacked in such a cutthroat way that it brought his father to tears, his father, and let us never forget how ruthless they were in their merciless onslaught against Vice President Dan Quayle, either.  Gone are the days of cooler heads in the Democratic Party seeking civility, men like Senator Daniel Patrick Moynihan, the ever feisty, always pragmatic Speaker of the House, Tip Oneal, Senator and Treasury Secretary Lloyd Bentsen, longtime-Democrat-turned-Republican Jeane Kirkpatrick and so many other men and women of their ilk.  There used to be people of good will and intentions in that party.  Not any more, to speak of.

The Democratic Party is one of two parties of the two party system of the greatest nation in human history.  As such, this is what they give us?  In their attempt at tearing down Kavanaugh the Senate Democrats let out an evil hiss, right up until they had to lay that golden fiddle down at Johnnie’s feet.  They were not interested in getting to the truth, they were interested in getting to Brett Kavanaugh.  There is a real likelihood that they conspired against this man with the notion that he was such a do-gooder, such a churchie church little choirboy type, that he’d just back down from them.  Well, the closest they got to that happening were a few tearful and choked up moments at that table in that hearing.  That these Democrats, with immense power, thought that this was going to fly was plum stupid, to not see the consequences of their failure in trying vacuous.  The blow back has already had a stinging effect, and this hollow, nasty stunt will be held as a point in case of their lack of trustworthiness and legitimacy for years to come.

The leaders of the Democratic Party are up to no good, with the media their cohorts.  Indeed, it’s a steady diet of flat out lies with the media swearing to it all, like giddy little children at those Democrat run White House press conferences, like piranhas at any Republican run ones.  We can all take a good hard look back at the scandal wracked Clinton White House, scandals galore, with so-called-journalists joining hands with Hollywood freaks in Lincoln Bedroom free-for-alls.  We can all take a good hard look at Obama, Pelosi, Reid, and the havoc they wreaked on our country.

Some pompous little Chicago politician who never lifted a finger to change, change, change a damn thing in Chicago, where hope is long lost (Obama), some pseudo intellectual with all the grace and warmth of the “queen of mean” Leona Helmsley behind the scenes (Pelosi), and some sniveling, snide little man whose efforts at missionary work for the Mormon church appear akin to Al Capone setting up plenty of soup kitchens (Reid), were the three most powerful people in US government for two full years.  Oh, my.

Democrats Barney Frank, as Chairman of the House Financial Services Committee, and Chris Dodd, as Chairman of the Senate Banking Committee, ignored President Bush’s multiple warnings about the housing market bubble, and were the two most responsible persons for the 2008 economic calamity that brought us to the brink of disaster (not an opinion to say that, an observation of historical fact).

And then the 2016 Democratic Nominee for US President was a person who is as filthy head-to-toe as we have ever seen in American politics.  Hillary Clinton cried her eyes out upon losing to Donald Trump, and one can consider the possibility that those tears derived from the fact that she’d be vulnerable moving forward, vulnerable to being exposed as the clear cut criminal she so obviously is.  Yes, that dirty and crooked politician should be locked up, sure.  After all, she’s a trouble-making criminal, and President Trump is a no holds barred type of leader.

…Yes, that dirty and crooked politician [Hillary Clinton] should be locked up, sure. ” 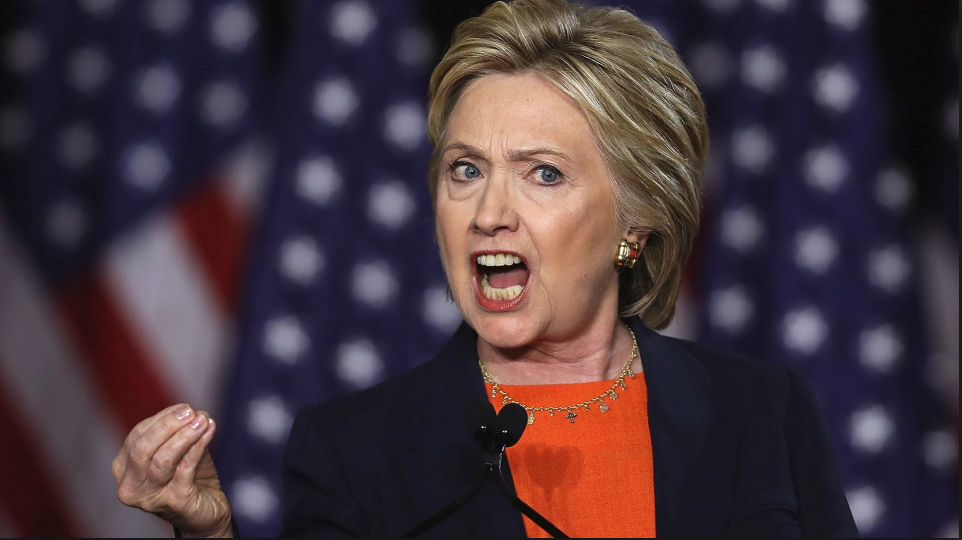 Perhaps Mrs. Clinton can share a cell with that nasty little thing by the name of Maxine Waters, while Diane Feinstein and Nancy Pelosi retreat from an awakened country.  Senators Richard Blumenthal, Corey Booker and Chuck Schumer can go ahead and join them, too.  Get the hell out.  Yes, that awakening was broadened by this ghoulish attack against such a fine man and jurist, and that awakening transcends political party labels as we the people, who are the backbone and heart of America, are on to it more and more.  We can see clearly now that leaders of one of our political parties have gone terribly awry of their sacred duties.

The minute that powerful politicians attempt to use what was a wild-eyed promiscuous teenager in High School, with a take-on-the-whole-football team sexual appetite, who offers nothing but her word from so long ago, to level baseless accusations at a Supreme Court pick, a man whose classmates from those High School years are aghast to a person, is the minute that the American voting public must reject and rebuke those who’d wield such power in such a horrid manner.  Good people of all political stripes are beginning to more fully understand the Trump phenomenon, now propelled with this event revealing the true colors of leading Democrats in that sacrosanct chamber.

President Trump serves as the personification of a portrait, a portrait of what we were becoming, and of what we must pull away from, and then get back to.  It is of paramount importance that we see a whole helluva lot of Trump Democrats in the 2020 presidential election cycle.  Important, not for Trump to win, he’s going to win decisively, probably with a mandate, but for the Democratic Party to, once and for all, get back to its origins.

They are indeed one of two parties, with America as mankind’s last, best hope, absolutely, with its shining city on the hill.  All good Americans who care about our future, about the future of our children’s children, must admonish today’s Democrats in power, these people who’ve engaged in this attempt at such a lowdown, dirty incursion, such a fiendish attack against a godly man.  This November the red wave ought to be high and wide, with nary a Democrat winning election or reelection, and in 2020, if we do see a great number of Trump Democrats in his reelection bid, well, it will be then that good Democrats will be able to send up a flare warning, and take their party back.